The sun was casting its light through the window, its rays brightly reflecting like burning phosphorous off the white sheets. I could hear the soft breathing of my partner as she lay, still asleep, her golden hair glinting in the morning light and the slow rise and fall of the sheets like the gentle lapping of waves caressing the beach.

I took a breath and turned to look out of the window at the head of the bed. Through the lattice work I could see the patchwork quilt of the countryside with farm houses and cottages dotted like pearls on a pretty dress.

I turned and lay on my back looking up at the delicate plasterwork on the ceiling and thought about the events of the last seven days.

Our holiday had started in Brighton. We chose pride weekend for our first visit to this seaside town.

Pride is a well organised party that brings people from all over the world for a street party and a festival in a park. The event promotes tolerance and love and celebrates our differences. Being a guy that likes to put on a dress, make up, and paint the town red this was the ideal weekend to start a holiday and spend the first three days feeling amazing.

Friday night was relatively quiet compared to the next two days. We spent the first part of the evening walking along the beach and sampled the local fish and chips, later we had a quiet drink in a couple of the many bars that are around the pride village area of Brighton finished off in the ‘Legends’ bar and club.

On the Saturday the parade assembled along the sea front. A huge crowd had gathered to see them start and the route to Preston park was thronging too. I had made the effort to wear my sequined Geri Halliwell dress which proved to be a hit, with a lot of people wanting a pic with me. This meant that Mrs Sox became very conversant with different cameras and smart phones over the period of the day. She did get a pic of me on my own in front of the Royal pavilion though.

The park had the various tents, stages and stalls that you would expect and there was quite a good choice of food. The sun came out and we had some noodles while sitting on the grass in front of the main stage.

After our lunch and a quick pic with a couple of girls that kept calling me ‘Geri’ we were on our way to the other stage when it went dark and the heavens opened. We ran for the nearest cover and it happened to be the Dance tent which happened to be next to the beer tent. We considered that getting a little bit wet was worth it and the sun was past the yard arm, although that big black cloud above us was obscuring the fact.

The rain was just a summer shower and passed by in less than 10 minutes but we lingered around the beer tent for a while longer.

We stayed to watch Sam Bailey belt out some songs and then took a steady stroll back to the village where a huge party was under way.

Our hotel was just a short distance away and I needed to change my shoes, as they had become uncomfortable. As we got up to the hotel a gaggle of people were singing to Dolly Parton’s Jolene, saw me and wanted pics.

When I removed my sandals I realized that the discomfort was actually burst blisters on both big toes. What was a girl to do? I put some plasters over the wounds put on my highest most sparkly shoes and joined the party.

The sun felt hot against my body as I lay on the bed. Waking up after a hard nights partying is always a case of feeling which bits hurt as the sensations slowly make their way to my brain. This morning I just felt thirsty. Even my feet didn’t feel too bad. A cup of coffee and I would be ready for breakfast.

After a hearty breakfast Mrs Sox and I decided to go and take a look inside the Royal pavilion. After visiting this place I recommend it to anyone. The decadence of the royal family is shown at its most spectacular.

Afternoon shopping a nice Italian inside and feeling full we wondered back to our hotel. The Party was in full swing as we entered the village area again. A quick change into something more appropriate, a pencil dress and heels and we entered the fray.

Monday morning the party was over. I surveyed my feet. I think I may have overdone the heels. It was not really a problem we were going on to Bournemouth and intended to relax more here and read our books in the sun my feet would have time to recover.

Bournemouth was nice our hotel had a balcony which faced the sea and was bathed in sun most of the day. Perfect.

Couple of days relaxing and we were off to our final destination. An eighteenth century tower in Devon. In the middle of nowhere with fabulous views, more history than you can shake a stick at and we had the place totally to ourselves

Mrs Sox turned over and saw me gazing at the ceiling. She asked me what I was thinking. ‘thinking about what to put in my blog’ I replied. 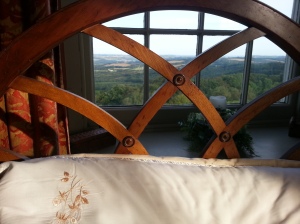 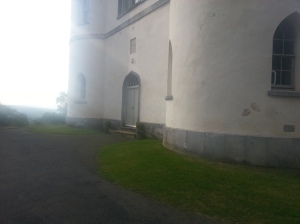